The Thistlegorm is one of the most famous worldwide wreck dive sites. The wreck is located in Suez Gulf at approximately 2 hours navigation from Ras Mohammed National Park. 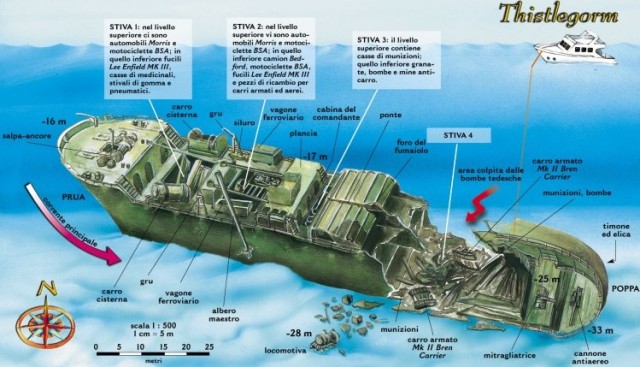 The Thistlegorm was a British navy boat built in 1940, the vessel cargo was transporting ammunition, truks, motorbikes and part of Train. She set sail on her last voyage but on the ealry hours of  6th October 1941 was attacked by two German bombers. The vessel sunk in Shaa’b Ali area at a depth of 30 metres.

Discoverd by Jacques Cousteau in the 50’s the wreck was kept as secret dive site untill the beginnig of the 90’s. The Thistlegorm is now one of the most famous wreck dive sites in the World.

The stern is open and allows an easy entrance, motorbikes, trucks, boots, ammunition, are preserved like in a museum. The grapeshot on the main deck is the symbol of this World War II ship.

The dive site is exposed to directional winds and strong currents, expecially during the first 15 metres. Due to this conditions and the depth of the dive site which is 30 metres, that this wreck dive sites is recommended to Advanced divers with a minimum of 20 logged dives.

The trip has an early start, around 5am and it’s a full day diving trip till 5pm.

Completely built in wood in 1873, the Dunraven vessel was loaded with Indian spices and cotton, due to a navigation error the Dunraven hit the reef. Some stories also tell that a fight on board was the real collission’s reason. The vessel went into flames and sunk upside down in Shaa’b Mahmoud at a depth of 30 metres. 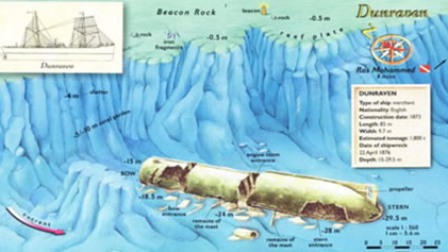 Discovered in 1977 the Dunraven is one of the Sharm El Sheikh wreck dive sites that offers the most easy access due to his upside down position.

Entering from the prow groups of Glass Fish and  Bat Fish are swimming all around. The stern is completely covered with soft corals. The cargo was entirely lost, what is left today are the boilers at the entrance.

Leaving the Dunraven wreck, the dive continues on Beacon Rock, a very nice coral wall well known to divers as many Stone Fish are easily spotted.

The Million Hope is the biggest wreck in the Red Sea. On 20th June 1996, crossing the Straits of Tiran the Million Hope vessel hit the reef and went on flames. The 25 crew members were all rescued.

The dive starts outside the stern where thousands of Nudibranchs are populating the area. The main deck hosts Crocodile Fish. Crew rooms are open and the on board work-shop complete with tools is very well preserved. This wreck dive site has a depth between 6 and 20 metres.

Information: All wreck dive sites are subject to addtional supplement on top of the daily diving rate: